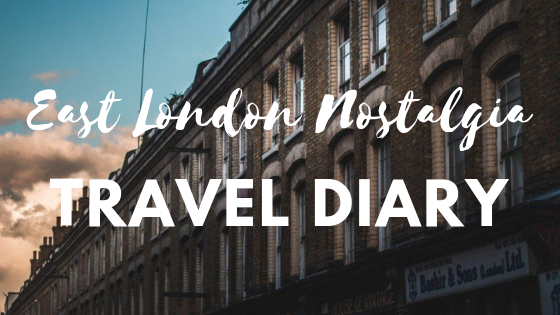 For the second time this year, I returned to the city I used to call home not too long ago. Last time, I visited for A.s  birthday (read more about that >> here <<). This time around the reason for the trip was the return of a former flatmate and one of my best friends K., who currently lives in Africa.

++ More posts about my life when I lived in London ++

I arrived one day earlier than my friend K. because the flights from Vienna to London were cheaper on Friday. I could have stayed at A.s place in Putney, but PUTNEY. Thanks but not thanks. Although I didn’t stay at her flat, A and I decided to meet around Brick Lane to have a few drinks and catch up. As always, she was extremely late and since it was a Friday evening all the pubs in the area were absolutely packed. Finally, we found one in a side street that wasn’t quite as full as the others and got a pint.

But because we met so late, we got our second pint at last call and had to head out again to find another place. On our way to the next bar, A was determined to scrounge a cigarette off someone on the street. She claims she’s not a smoker and hardly ever buys herself a pack of cigarettes, but every single time she has a pint (doesn’t mean she’s drunk), she smokes.

Finally, she found a girl who took pity on her in front of, what looked like, a pop-up bar where a live band was playing jazz but very little people were inside. We talked to that girl for a while and she told us that she lived in a narrowboat on the canal. I was fascinated. I’ve always been very intrigued by alternative lifestyles and love watching videos about people who live in boats, tiny houses, busses, cars etc. Unfortunately, she wasn’t that into talking to us any longer and went back in.

A. and I ended up at a bar on top of Brick Lane. It was already pretty late and you could clearly tell that some people had been drinking for a lot longer than we had. A girl sat down next to us, her friend tried to convince her to go home, but she wasn’t having it. At first she refused, then she just fell asleep – head on the table. That’s when the security guy got involved and pretty much kicked her and her friend out of the bar.

We decided to end our night out as well, but went to the bagel shop for a late night snack. While we were eating our bagels on the street outside the shop a group of polish guys approached us. At first they tried to flirt, then the conversation turned weird – they started talking about burkas. We left as we weren’t interested in them in the first place.

I left the hostel I was staying at for the night pretty early. After some coffee, I ran some errangs, which sounds a bit weird as I’m technically on holiday in London. But from having lived there, I know what things are better to be done in the UK – stocking up on OTC medication for example (because it’s way cheaper than in Austria).

Then I was waiting for K. to arrive in front of our accomodation. It was on Petticoat Lane, hidden inbetween fabric shops, pretty hard to find, but when we did the cheerful (and very good looking) Italian general manager showed us our room. After dropping off our bags, we made our way to Broadway Market to meet S. and grab some food. I hadn’t seen S. for over a year, so I was very excited to hear what she was up to. S. is a person with an extremely interesting background – lebanese, raised in Syria and Saudi Arabia, was married to a Canadian and has lived all over the world.

Lucky for us, it was a beautiful day and we could enjoy our delicious market food in the nearby park. When we finished our food, we decided to walk down the canal – to Victoria Park, further down to Mile End, Limehouse and finally to Shadwell. Shadwell has been a very special place for me while living in London. It was the first area I lived in when I arrived in 2013, ended up moving back there in 2015 – this is when I met K. and lived in the best flatshare I’ve lived in in London. Sadly, the flat we used to live in has been sold and the Flat 35 crew is now, not just spread over London, but all over the world.

After freshening up, we went to Last Days of Shoreditch, a pop-up venue that has now closed, met some more friends. K. and I get “one, only one” bottle of Prosecco. Ok maybe two, maybe three.

Friends of friends show up and someone suggests to move on to a houseparty in West London. So we make our way to West, unfortunately I can’t recall where exactly we where as I’m not familiar with West London and I guess the glasses of Prosecco also played their part.

We tried finding a corner shop to buy some alcohol, so we didn’t have to show up at this party empty handed. We found plenty of corner shops but none that sold alcohol. It was surreal. Felt a bit like were in a dystopian version of the city we thought we knew. As a last resort we had to walk into a restaurant and buy an overpriced bottle of wine. Where the hell were we?

When we finally arrived, the flat was packed and the party already in full swing. For London, it was an extremely nice flat – modern & decent sized. A quick hello & thanks to the host, more drinks, small talk, extremely meaningful conversation with strangers – as you do, when intoxicated.

We didn’t stay too long as K. really wanted to party in Vauxhall. It was already midnight or maybe even later when we arrived at Lightbox. A night in a Vauxhall Club is always “interesting”, as they are the places where the most hardcore party animals like to spend their drug-fueled days and nights. Things can get weird in there, especially when you’re female without a male companion.

At around 5am we were done with Lightbox and K. suggested going to Union. I wasn’t up for it at all, as I’m not into stimulants and ready for bed. K. insisted we would at least see if they were letting people in still – they were not – thank god. I guess, they actually were but at their discretion and I guess we already looked a bit rough. So we got an Uber and passed out in our hotel bed.

Unsurprisingly, we started day nr. 3 pretty late. There was only time for a quick shower before we had to head out again to meet K.s friend N. in Hackney Wick for lunch. K. and N. met whilst travelling South America and had stayed in touch and when K. moved to London they hung out again. In a way N. is a bit of a London City cliche – a tough, bright, young woman in a high power banking job, “relaxing” on weekend by excessive partying and a bit of a coke habit.

We arrived at Number 90 Bar, just to find out that they weren’t serving their regular foods, but exclusively Sunday Roast. Disappointed, we sipped Bloody Marys and caught up. Since our bellies were still empty, we decided to go back to Brick Lane to get some food from the market.

Later, we met another friend at Boxpark Shoreditch, but I didn’t even order a drink as I had to leave early to head to Liverpool Street Station and catch the Stansted Express to the airport. So another great weekend in London ended. A weekend that left me more nostalgic than any other London trip.

Home away from home

What was different this time, was spending most of my time back in the neighbourhood I first “landed” when I moved to London in 2013. London to me will always be Shadwell and the surrounding area – my, now, home away from home, my home in London. My best friends, flatmates and the people that “made” my experience have left London as well. Everything has changed. But it was great to have the opportunity of coming back for a weekend, reuniting and reliving parts of what used to be my life.

This site uses Akismet to reduce spam. Learn how your comment data is processed.